It turns out getting to Nanortalik off the southern tip of Greenland from Scotland requires three flights, two by airplane and one by helicopter. The 10 day adventure began here on this tiny island in the Labrador Sea. A two hour speed boat ride passing by Narsaq Kujalleq all the way up this fjord to the base of the glacier. Little did we know that… Narsaq would be our refuge a few days later after being rescued from a storm. Turning around at the base of the glacier the reflections in the fjord highlight how over time the ice has carved out this U shaped valley from solid rock.

Walking around on a glacier with it’s noisy cracking sounds as it moves under your feet always bumps up your heart beat a little.

Next it was a race down the fjord. Two boats and 11 shooters.

I took this selfie just as the setting sun’s last rays hit the peaks behind our campsite.

Toasting marshmallows around the fire was a quick afair as there is basically nothing to burn in Greenland. There are no trees and not much burnable vegetation. Before bed on the first night I just stood there alone until I got really cold looking up at he stars and the surrounding peaks covered in snow. 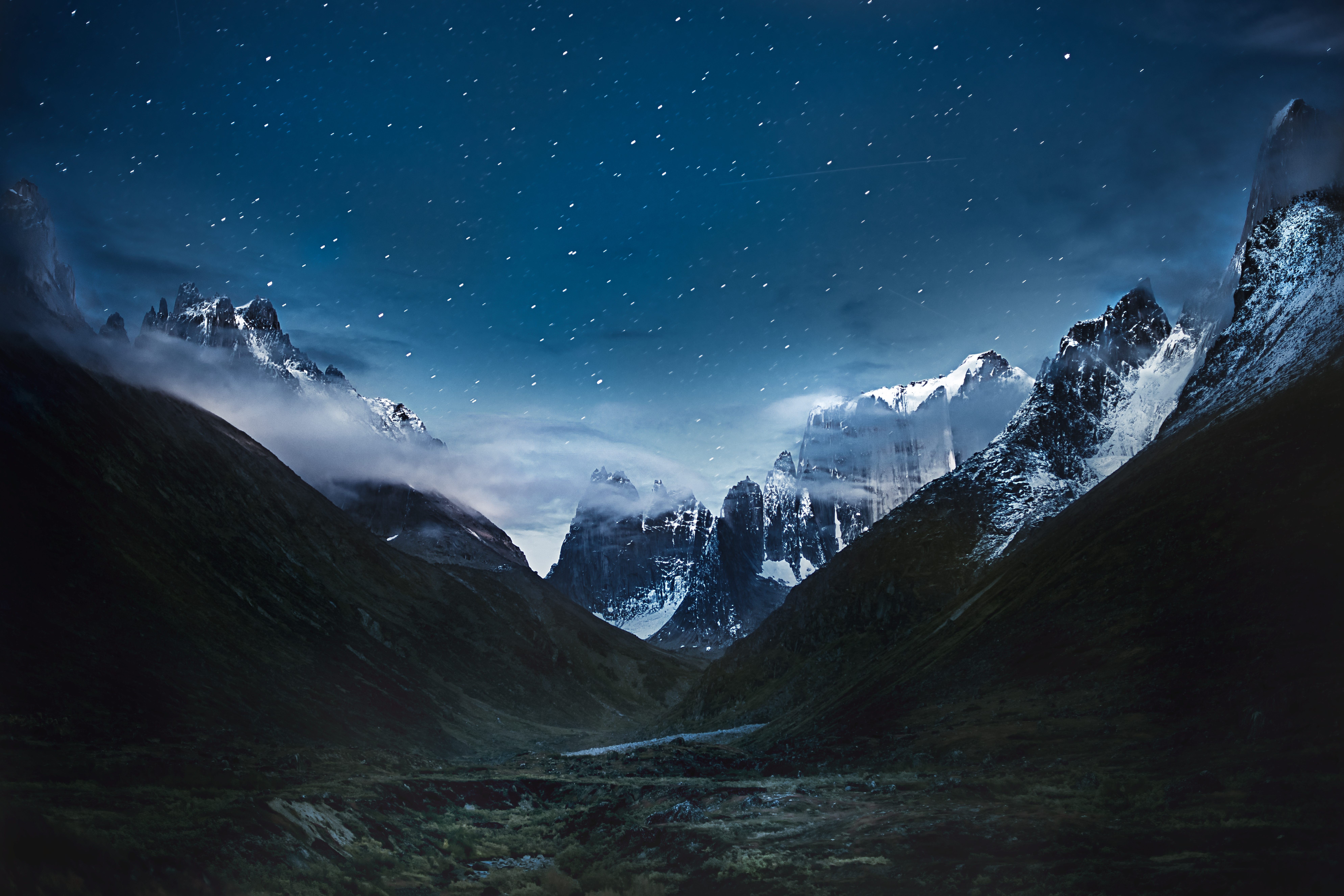 The following morning we hiked this valley with low level clouds occasionally opening up for a glimpse of the peaks all around us. I was really enjoying my new waterproof socks.

Back at the campsite that evening watching the sun illuminate the same mountains obscured in the morning.

Most of the shoreline looked like this with the mountains rising almost straight up out of the water in some places to over 4,000 feet.

We had two guides with us. The talented Matt Jackisch and the infamous Marco Grassi. The trip was put together by Max Rive who’s images continue to blow my mind. Here is a black and white silhouette of Matt on ‘overwatch’ for polar bears near one of our campsites.

At another campsite I was up early as usual to catch that golden first light of the sunrise hitting the mountain tops. I will admit my feet did go numb standing in the reflection pool making more than a little tricky to get out without falling down into the water.

While resting up in Narsaq for a couple of days we could see icebergs slowly floating by on their way down the fjord to the open sea. Sometimes they got stuck on rocks or in shallow water like this one. I don’t get to see icebergs very often so I went back to this same spot at night to find this iceberg and it was gone. But there was another one out in the fjord illuminated by the full moon. 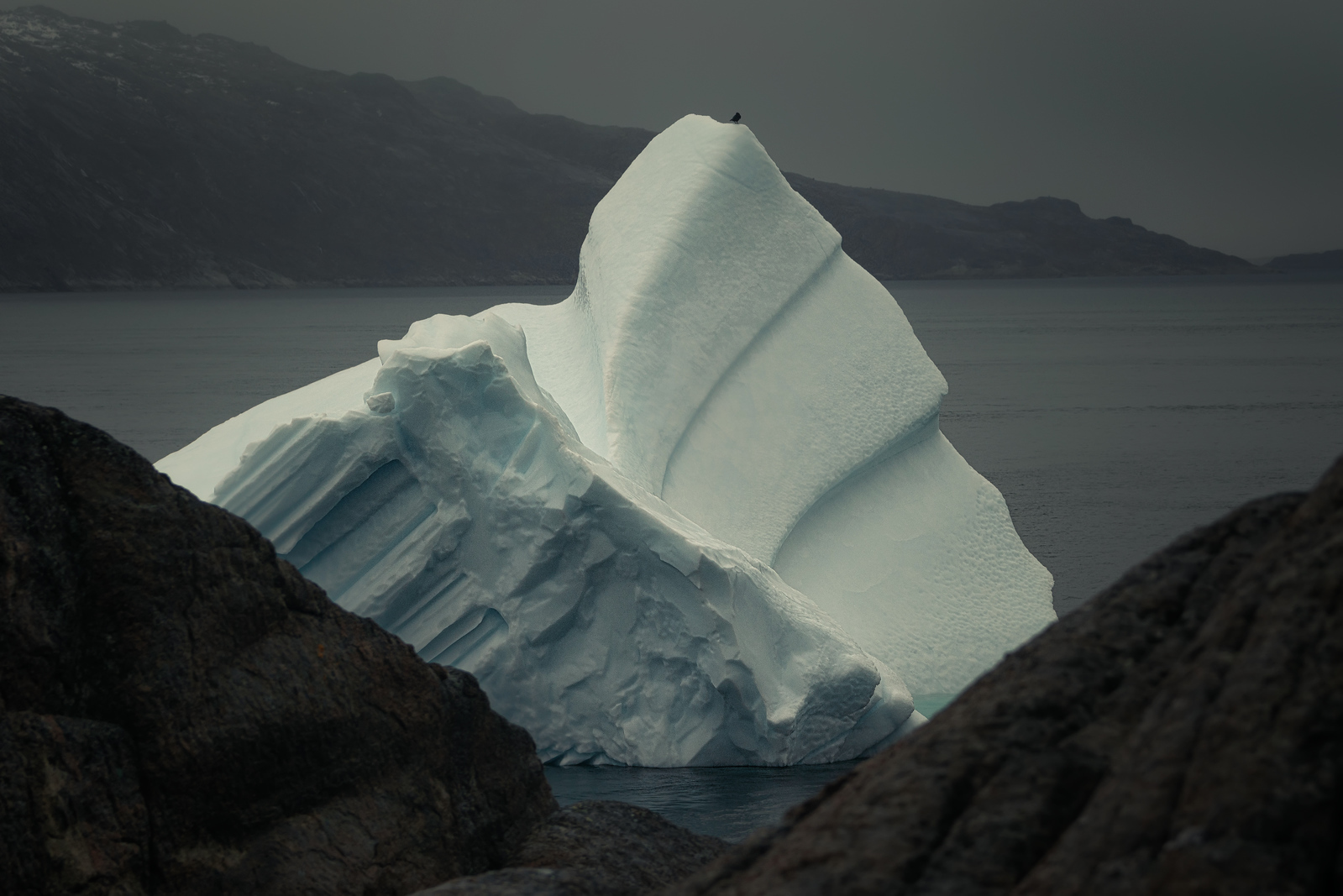 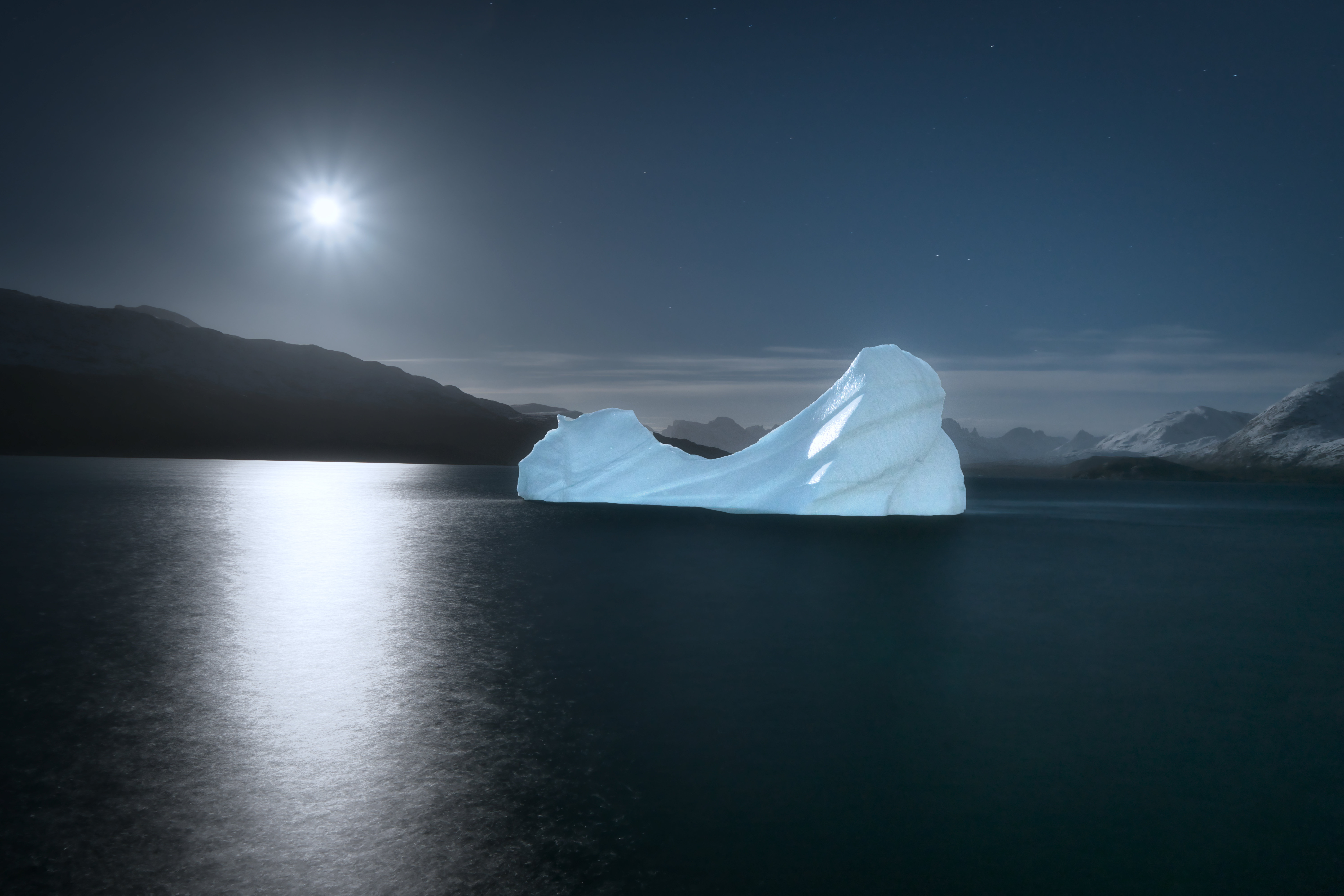 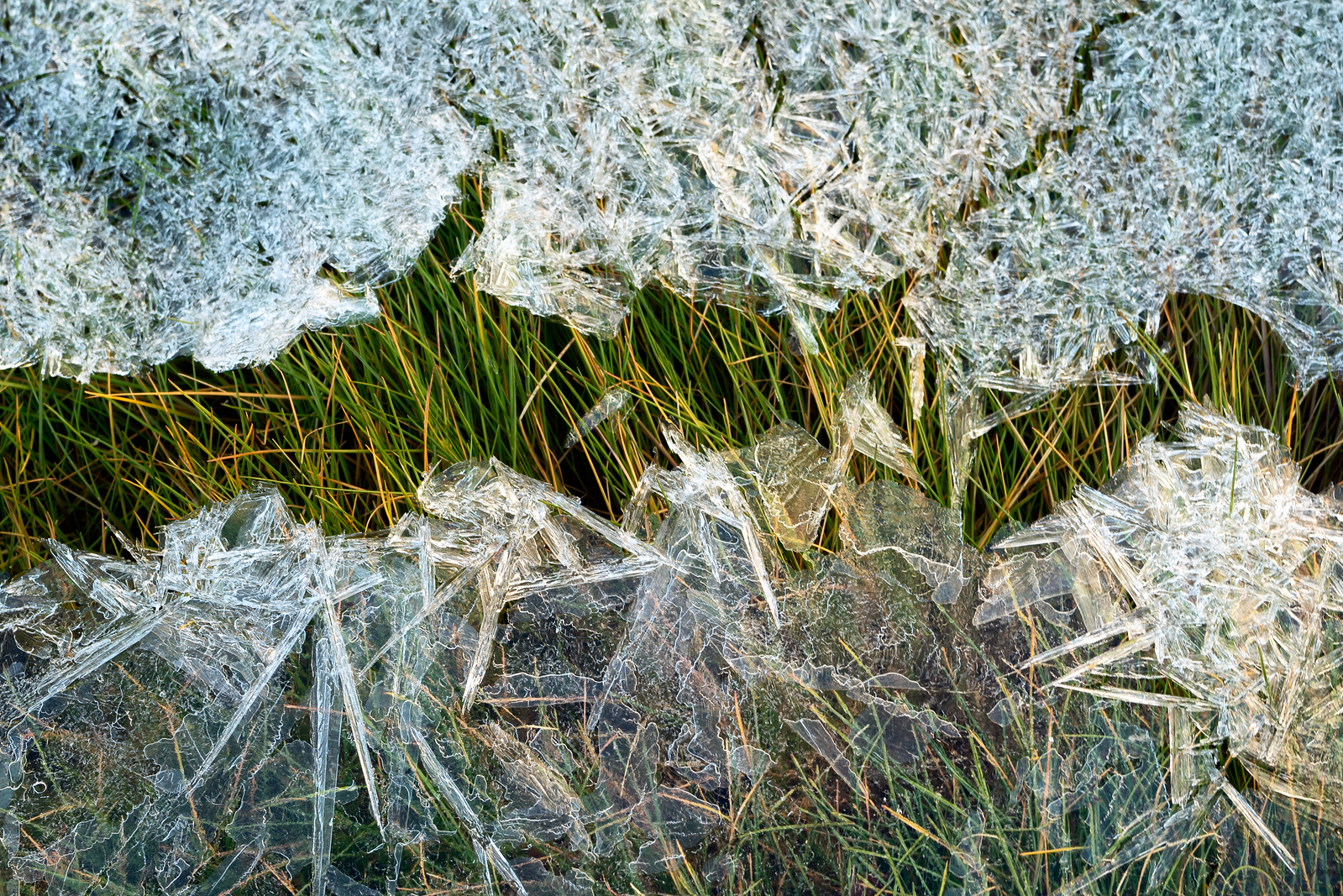 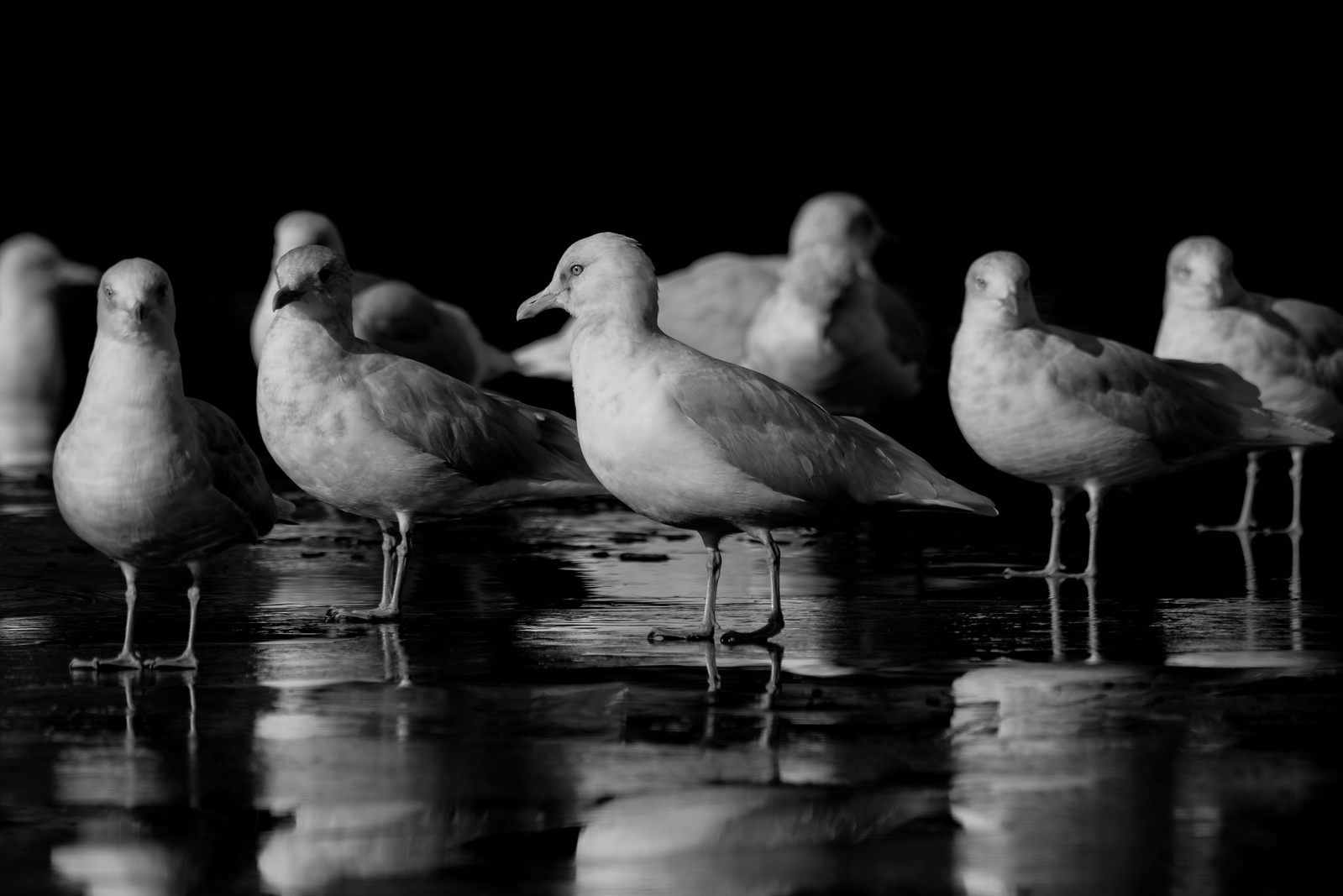 While leaving the harbor in Narsaq to to go get a closer look at the iceburg’s floating in the fjord I noticed these seagulls sanding on the floating ice posing for a picture. 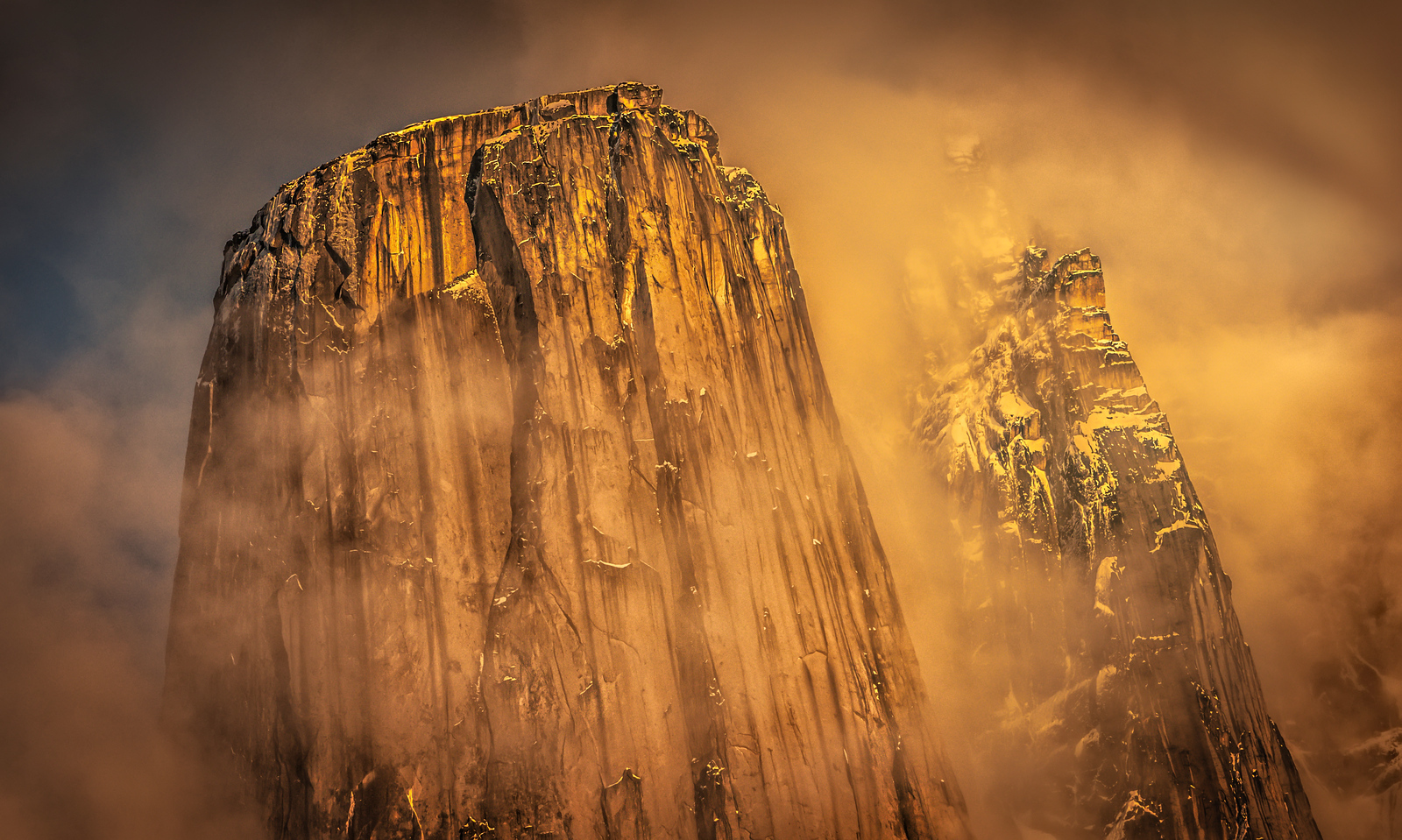 Another shot of the surrounding peaks bathed in sunlight in the late afternoon. Below is the very last part of an iceberg still floating as the rest has melted into its watery grave.

These epic views off he mountains all around us while we were on the water traveling between campsites never ceased to impress. 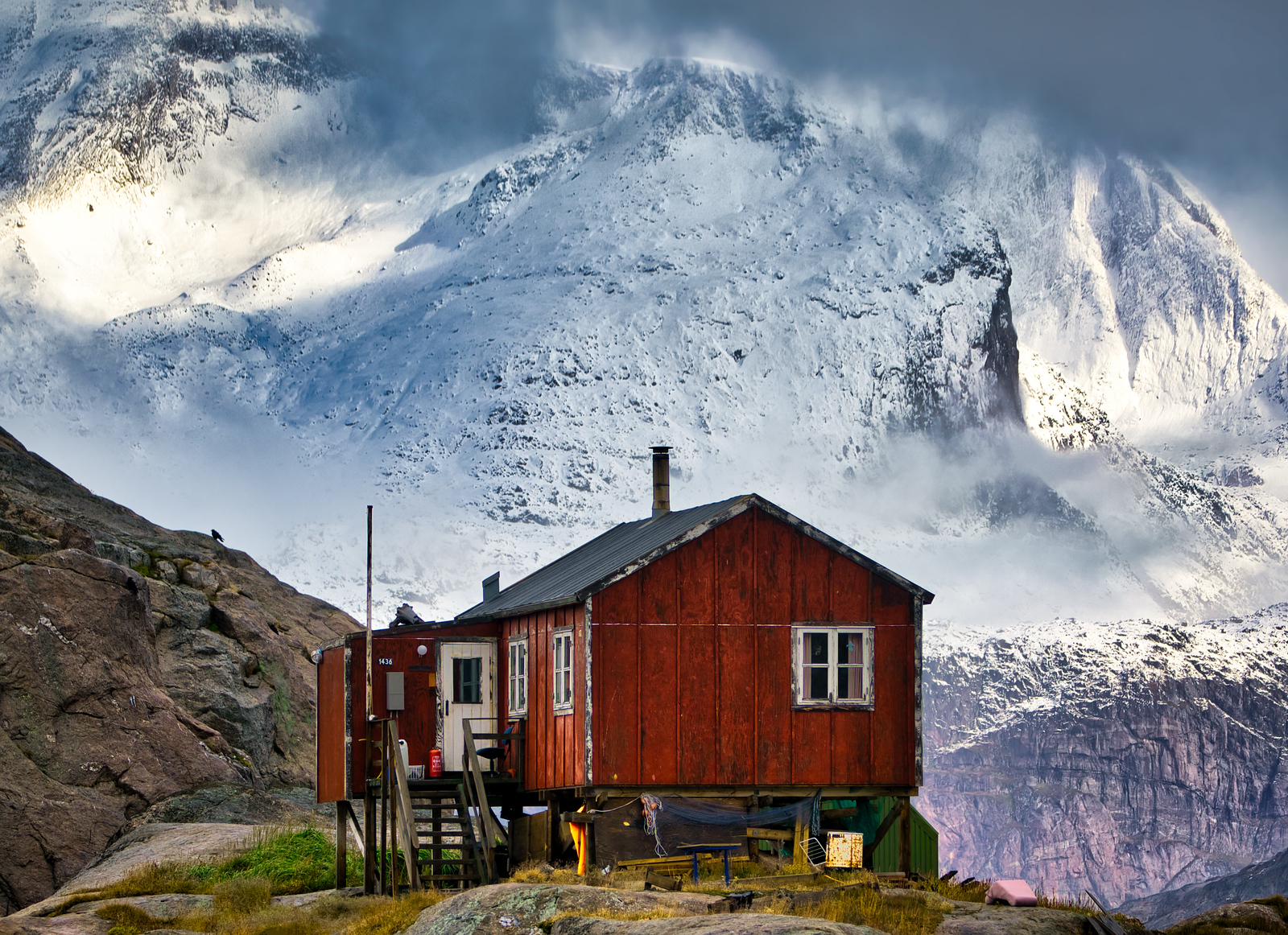 This is one of the small wooden houses in Narsaq f which are all brightly painted in different colors.

Up close and personal with an iceberg and our local boat driver who had one eye that never opened. 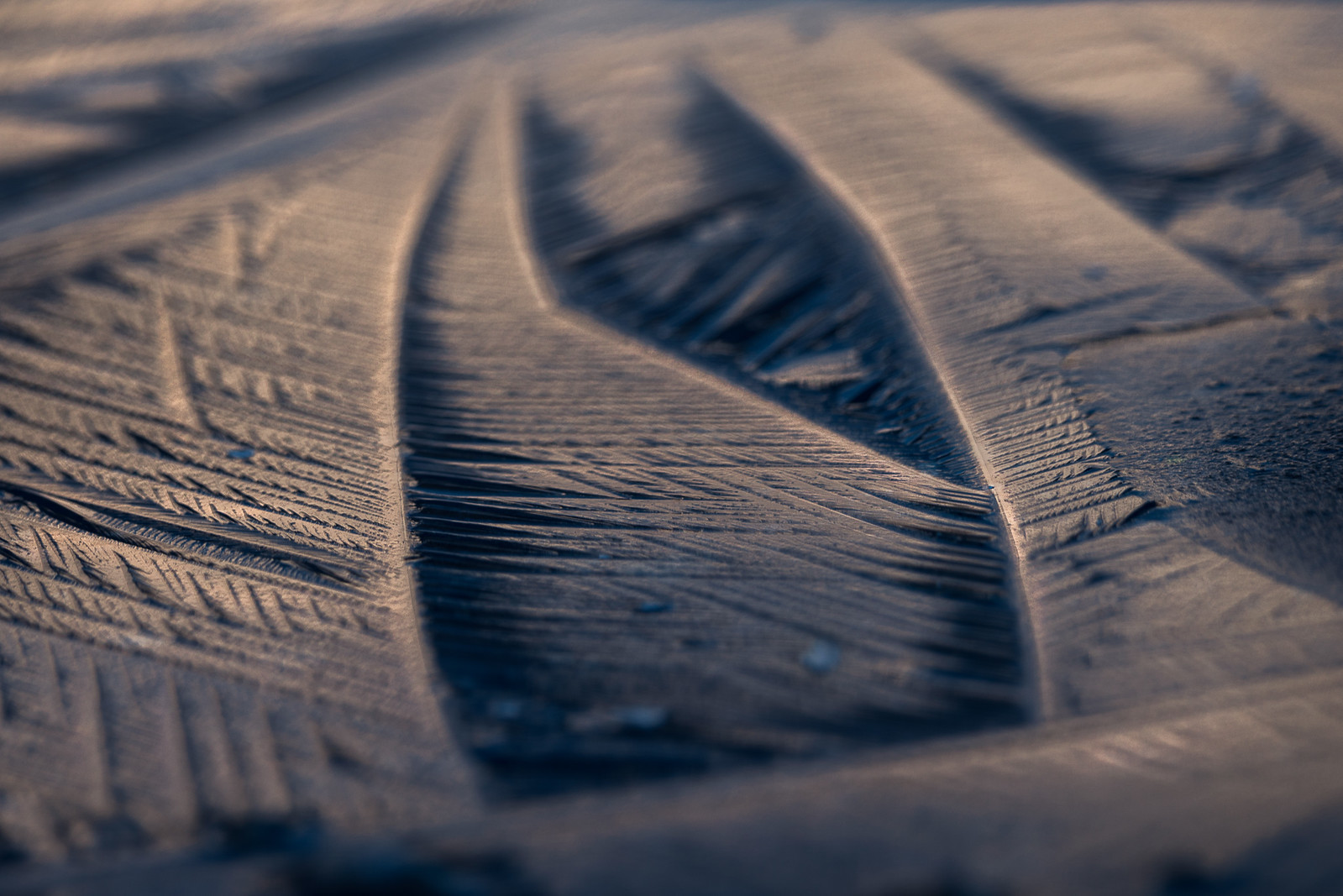 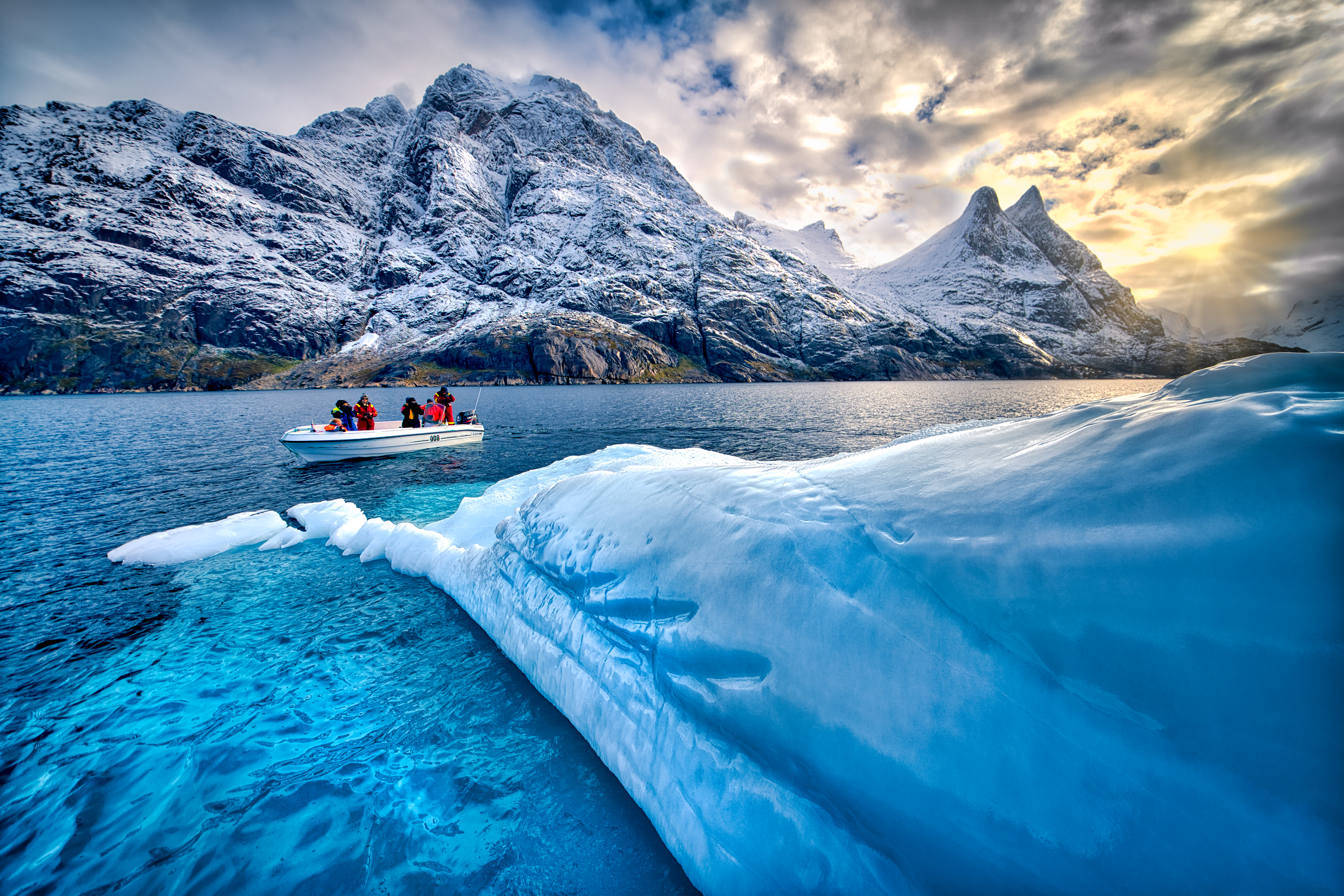 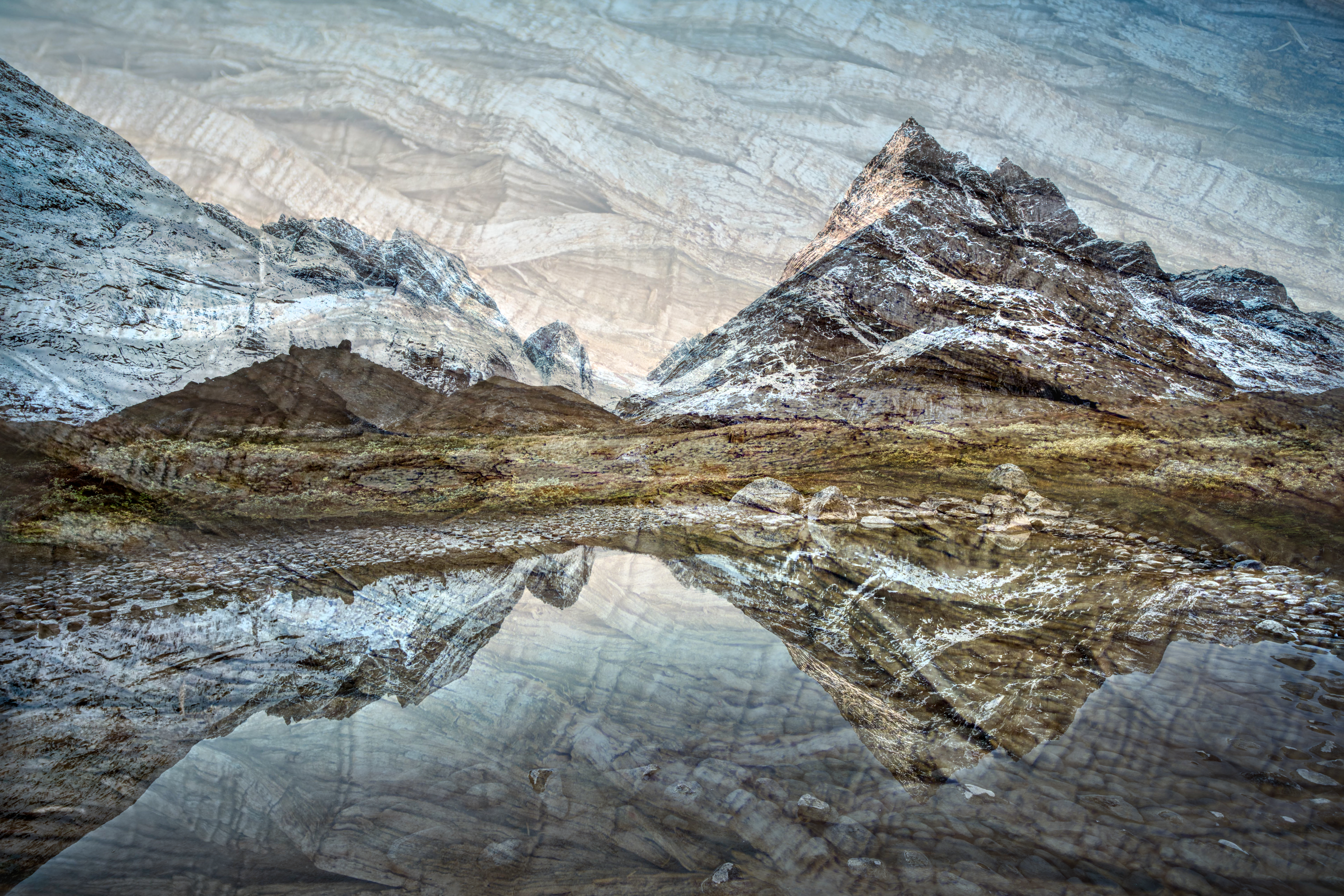 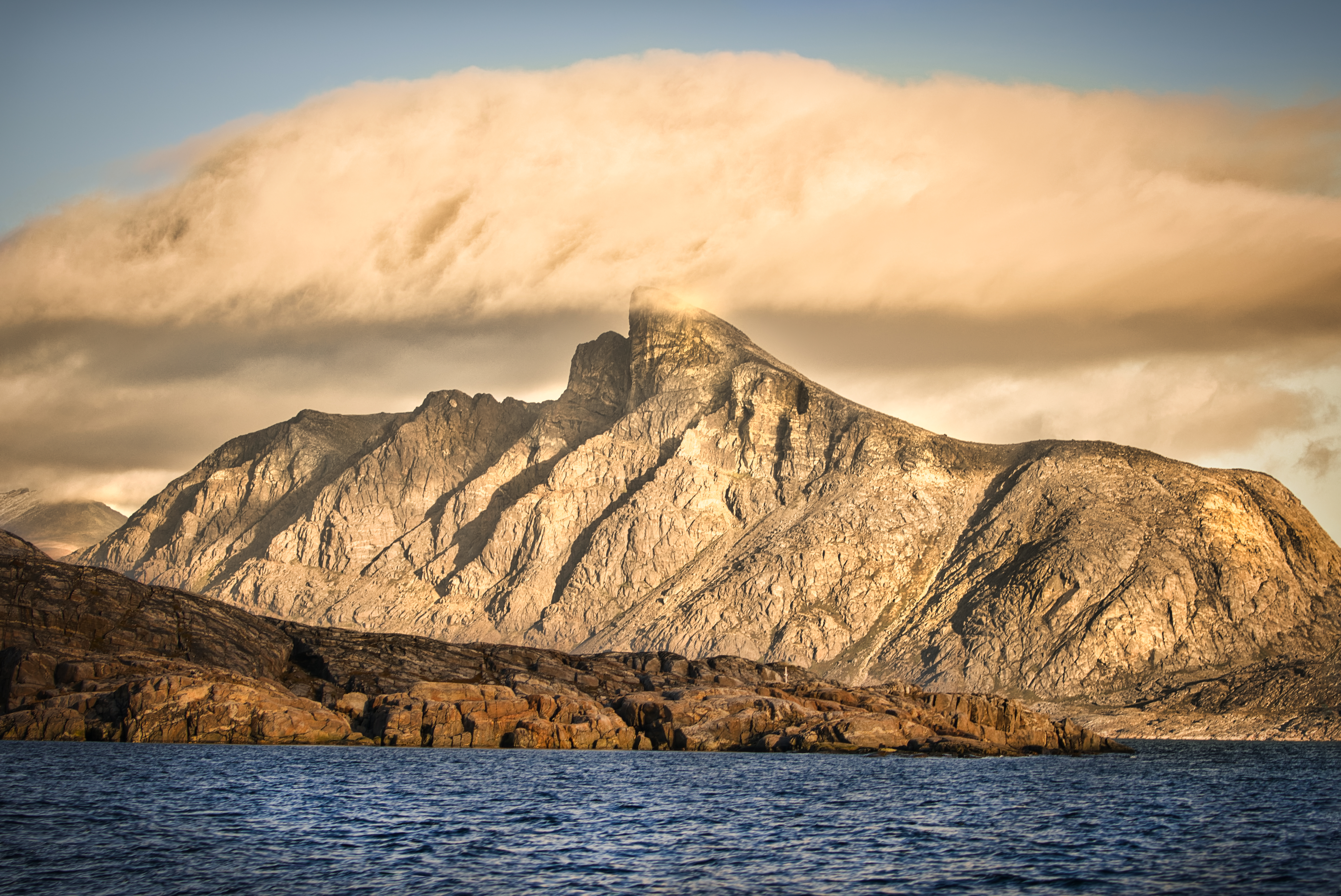